Toronto is U.S. and Canada's fastest-growing city, and that's not good

Torontonians could find themselves “doubling up” on housing with friends or relatives in the coming years as the city’s breakneck population growth outstrips the supply of new housing, an urban planning expert is warning.

In an analysis published online this week, researchers Frank Clayton and Eva Shi of Ryerson University’s Centre for Urban Research and Land Development found that Toronto is the fastest-growing city in the U.S. or Canada, and by a long shot. The city added more than 77,000 net new residents in the year ending in July, 2018, more than three times as many people as the next municipality, Phoenix, Ariz.

The researchers describe this rate of growth as “stunning.” 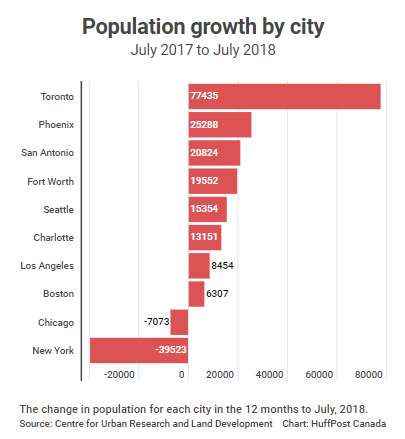 Looking at metro areas, Greater Toronto had the second-fastest population growth, behind only Dallas-Fort Worth. Greater Montreal was the sixth-fastest growing metro. 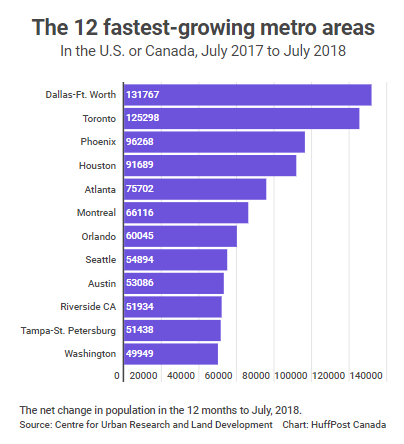 But while that may look like success from some perspectives, it means the Toronto region is risking a serious housing crisis, study co-author Frank Clayton said.

The metro may see a repeat of the situation from the early 1990s, when developers pulled back on home construction amid falling house prices, but the population kept growing.

People found themselves “doubling up” or “tripling up” on housing, often with more than one generation of family living in a single home, Clayton said.

That effect could be particularly strong today, given that younger Canadians are already increasingly living with their parents.

“In the ’90s, immigration was very strong but it wasn’t showing up in the housing demand numbers,” Clayton, a real estate and urban economist, told HuffPost Canada by phone.

As is the case now, affordability was at multi-year lows. But unlike today, the economy was shrinking in the early 1990s, with the region losing some 200,000 jobs amidst a North American recession. Interest rates were high, making mortgages prohibitively expensive. The result was that developers couldn’t unload empty condos even as residents were forced into shared housing.

Today’s home sales slowdown could result in something similar. Data from Canada Mortgage and Housing Corp. shows developers are reacting to the slowdown by cutting back on new construction.

Housing starts in Ontario fell by more than 15 per cent in the first five months of this year, compared to a year earlier, according to data from Canada Mortgage and Housing Corp. In Toronto itself, housing starts so far this year are down 24 per cent, and housing completions are down 22 per cent from the same period last year.

“It means we need more housing supply,” Clayton said, especially at the low end of the housing market.

Open up the ‘yellow belt’

Clayton says the single best thing the region could do ― “but which they won’t do” ― is to open up single-family home neighbourhoods for multi-unit buildings of up to three or four stories.

His skepticism stems from the fact proposals like this are often resisted by residents of low-rise neighbourhoods ― the NIMBY phenomenon. Yet these neighbourhoods, known as the “yellow belt” for their colour on city maps, account for three-quarters of the land area of the city of Toronto, Clayton noted.

“With the growth that’s taking place, and land prices rising, you’ve got to start allowing for a more diverse housing stock,” he said.

But he’s skeptical of the city’s proposal to mandate inclusionary zoning — in essence, making a requirement that new condo buildings include some percentage of affordable homes, meaning below market rates. Clayton believes developers will simply unload the added costs onto buyers of the market-priced units.

“They’re going to raise the prices on the other 80 per cent. Which means other people have to pay more. If they try to up the prices, then resale condos become a better deal … so you give a windfall to existing homeowners again.”

Also, that plan relies on the construction of large condo buildings to meet housing needs, and “research is showing that millennials want something more than a high-rise,” Clayton said, referring to surveys showing Canadian millennials overwhelmingly prefer low-rise housing.

He sums up the whole problem rather succinctly: “It’s going to be really difficult."