The average rent in the GTA continues to trend upward heading into the latter parts of 2021 based on listings data for all property types on TorontoRentals.com.

The average rent and annual change in average rent by bedroom type in the GTA from January 2021 to September 2021 is presented next. Five- and six-bedroom units have been removed from the chart, as the small sample size leads to monthly volatility. 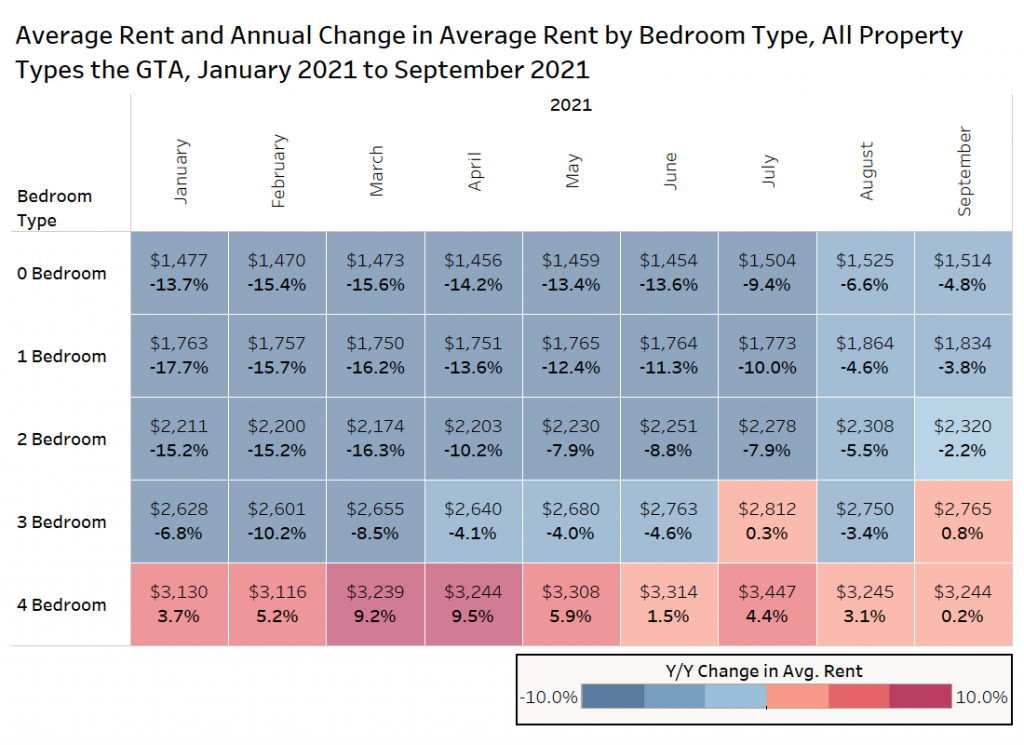 Studio units have seen their average rental rates produce consistent year-over-year declines between the months of January and September 2021. The largest annual decline was experienced in March 2021 at 15.6%. As mentioned above, the more recent months show signs of recovery as September 2021 only shows an annual decrease of 4.8%. Studios are about $45 more expensive than in February.

Three-bedroom units did not decline as harshly as their smaller counterparts, experiencing an annual decline in February 2021 at 10.2%, while showing an annual increase of 0.8% in September 2021. Four-bedroom units were the best performing segment of the market, posting annual increases in every month of 2021. The largest year-over-year increase was experienced in April 2021 at 9.5%. As documented in many previous reports, the desire for more space to work from home and educate from home, as well as a decoupling of employers and their place of employment made four-bedroom townhouse and single-family home attractive rental options during the pandemic. 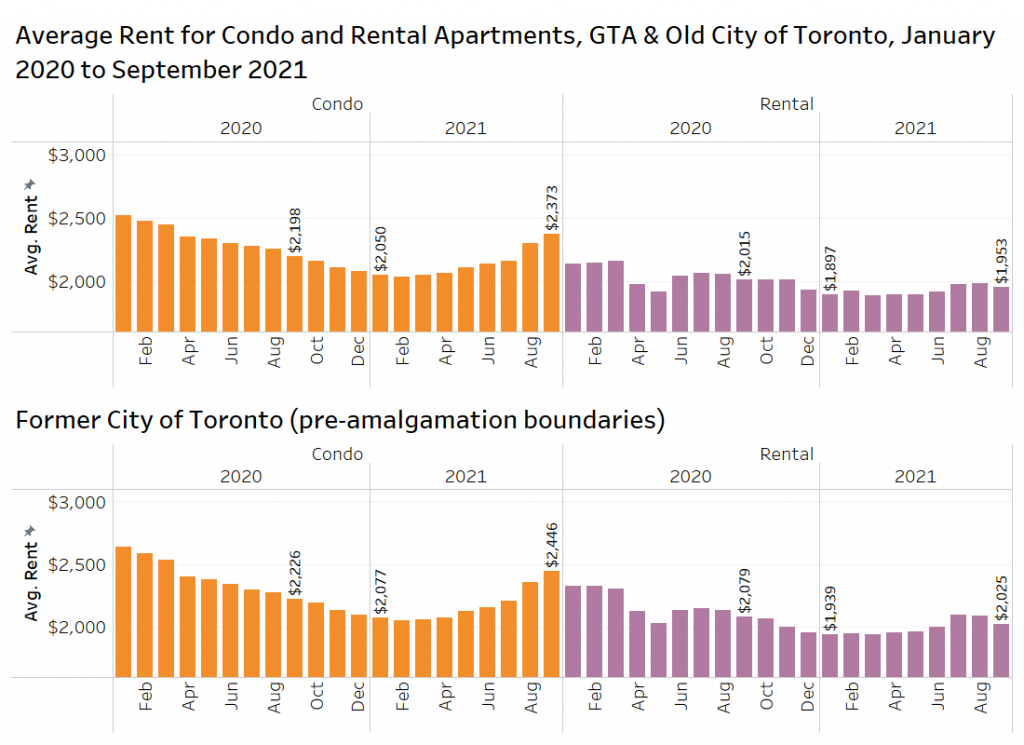 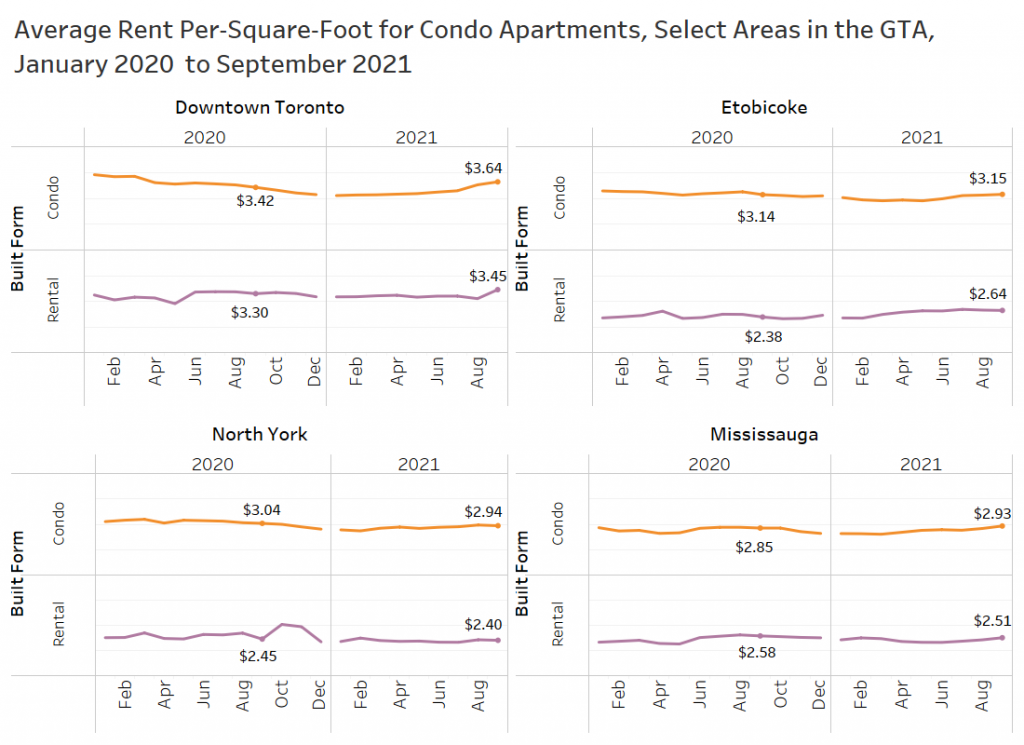 Average Rent Per Square Foot in the GTA by Postal Code 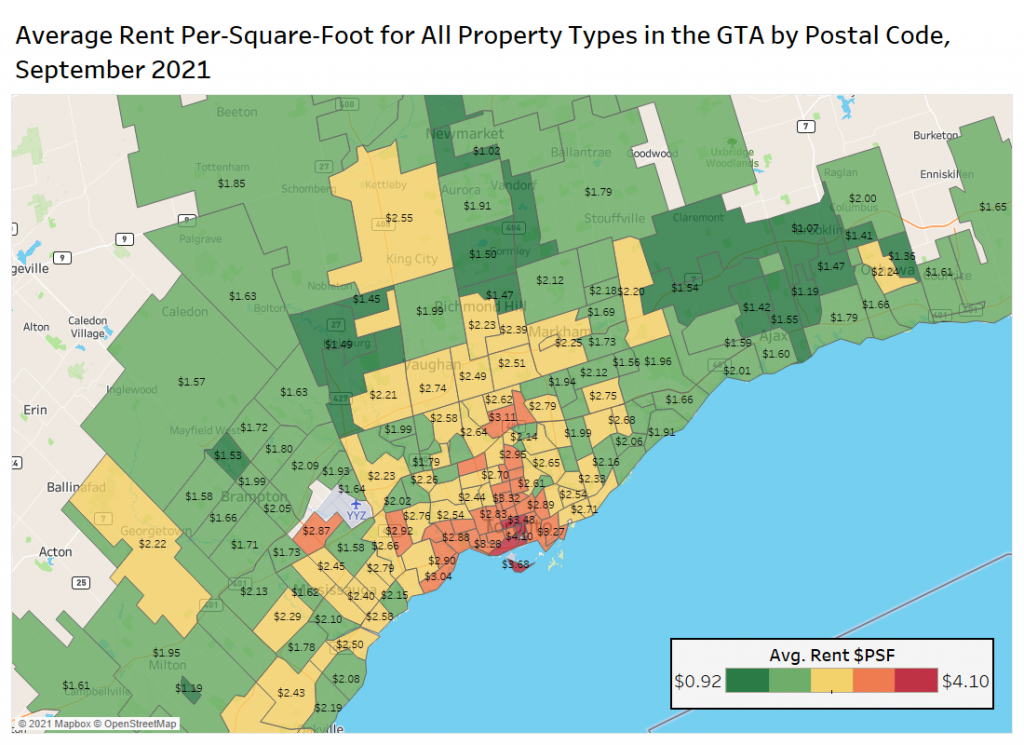 The following figure presents the average rent per square foot in postal codes across the GTA in September 2021. This chart includes all property types (singles, semis, row, condo & rental apartments, as well as basement apartments).

The rents are heavily influenced by the type of product for rent, with many of the outer-suburban areas having only single-family homes for rent, while the downtown core is more dominated by new condos. 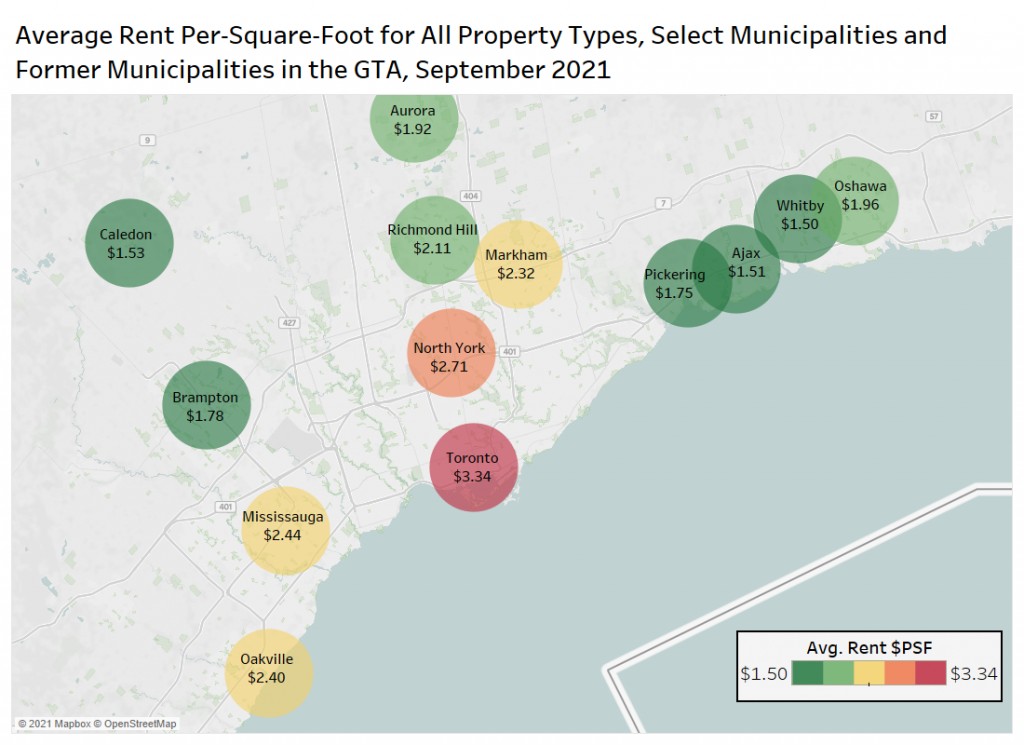 The average rent in the GTA has gone through a roller coaster of a year, with basement apartments, rental apartments, condo units, and single-family homes all experiencing sharp declines at some point during the last two years.

Note that the sample sizes of basement apartments, townhouses and single-family properties are much smaller than rental or condo apartments on TorontoRentals.com and experience more monthly volatility, despite the chart below being a three-month moving average, which we use to smooth out some of the monthly movements to recognize a trend. 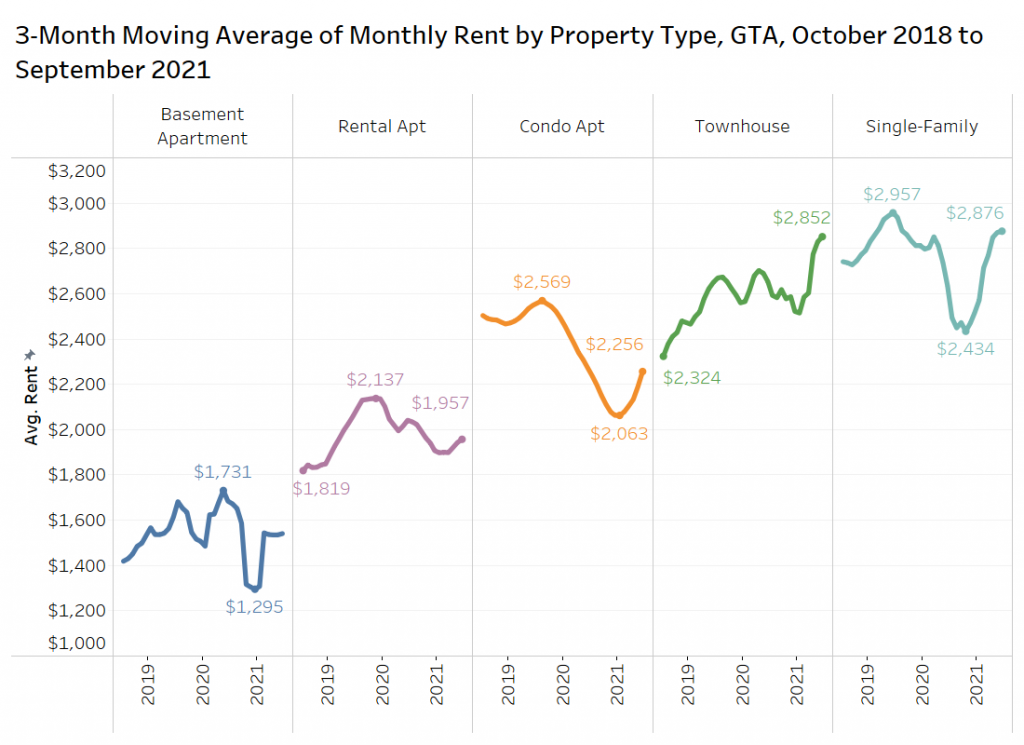 Townhouses in the GTA did not seem to be as affected by the pandemic as other market segments, with prices staying relatively stable in 2019 and 2020 before continuing to increase in 2021.

The following figure presents the three-month moving average of average rents per square foot for the five areas (municipalities and former municipalities in the GTA) with the most listings between October 2018 and September 2021. 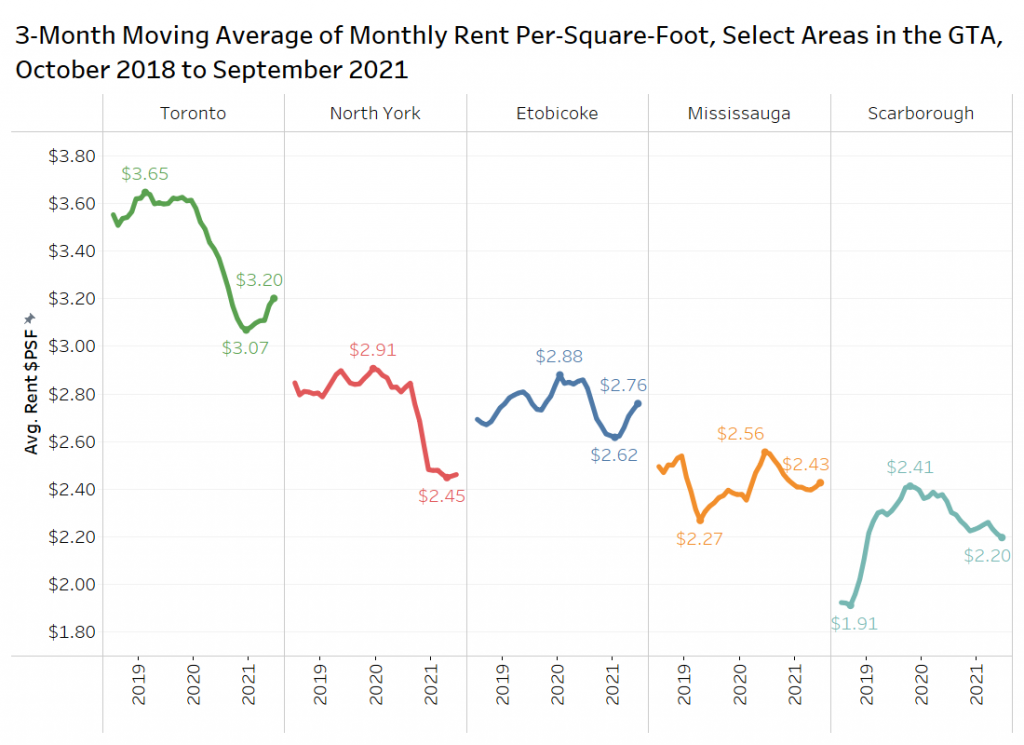 In terms of declines from peak levels in 2019, the biggest decline is in North York at 16%. The municipality with September 2021 rent closest to its peak level is Etobicoke.

Average Rent Per Square Foot by Area and Unit Size

To no surprise, across most unit size segments Toronto maintained the highest average rent per square foot out of all the areas in the GTA between July 2021 and September 2021 — this is based on listings by rounded-unit size for select municipalities and former municipalities. This includes only listings from 450 square feet to 1,349 square feet. 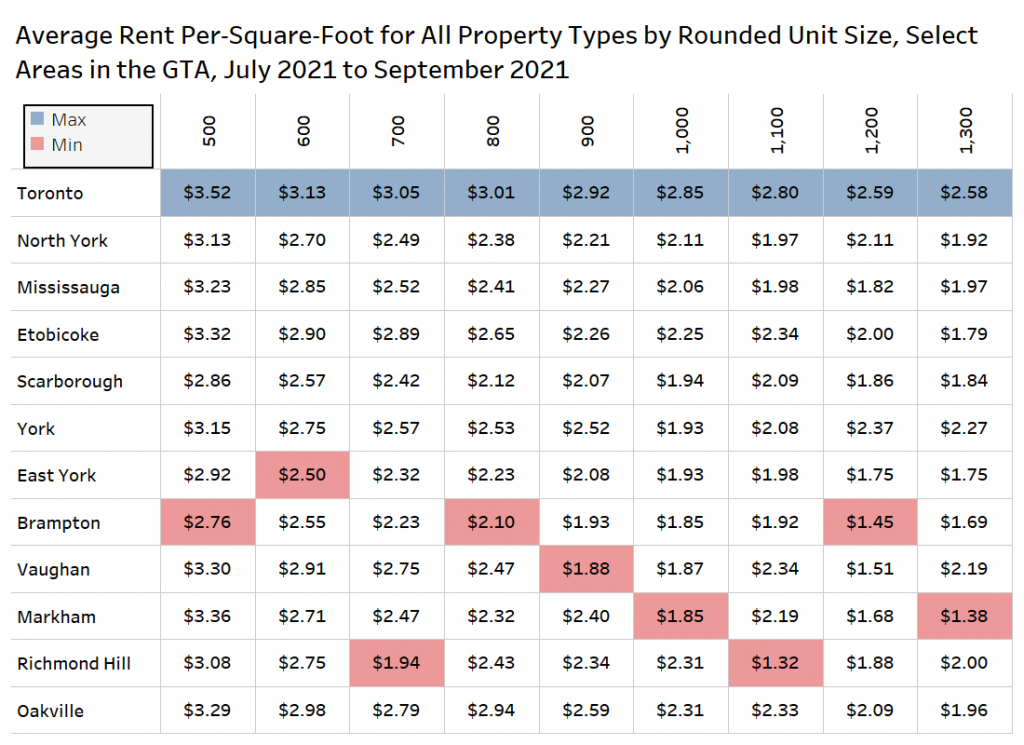 Notably, Brampton had the lowest average rent per square foot for units in the 500-square-foot range, as well as for units at 800 square feet and 1,200 square feet.

The average rent in the GTA has clearly shot up from lows in March 2020 and will look to continue its recovery heading toward the last quarter of 2021. Four-bedroom units were the best performing segment of the market — a result of the desire for more space as many employees continue to work from home for the foreseeable future.

The past two years have been rough on all segments of the rental market with the exception of townhouses, which maintained a fairly steady rate since 2019 with sharp increases during the more recent months. Condo apartments, on the other hand, experienced a sharp decline throughout 2020 and have just started to recover. Single-family homes, similar to condo apartments, also experienced a sharp decline throughout 2020. The average rent for single family homes, however, have almost completely recovered to peak 2019 levels.

As the country continues its return to normalcy, rental rates continue to recover (condo apartments more quickly than rental apartments). Moving forward, average rents of larger units (namely townhouses and single-family homes) look to continue increasing as the demand for space to work from home persists.