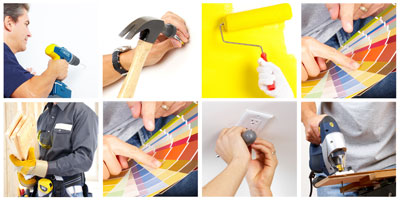 The federal government isn't the only one spending on construction projects of late, as Scotiabank said Wednesday that Canadians will spend a record $53 billion this year on home renovations.

The bank said in a monthly real estate report that spending on reno projects is up by six per cent in the first half of the year, and on track to clock in at $53 billion in total.

That would be as much as Canadians spent on new housing construction, the first time that's ever happened. While the amount of overall money spent has never been higher, Scotiabank economist Adrienne Warren said the early years of the new millennium, between 2000 and 2007, saw even stronger pace of growth averaging nine per cent in the years before Canada entered recession.

But after a few years in the doldrums, Canadians' appetite to fix up their homes appears to be rising again across the country.

"Renovation spending is up in all provinces with the notable exception of Alberta," Warren said.

While the reno boom appears to be on everywhere, it's especially hot in Toronto and Vancouver — two markets that also happen to have the hottest housing markets. "Tough competition for single-family homes makes renovating an attractive option for current owners looking to upgrade, as well as for first-time buyers trying to get a foothold into these high-priced markets via fixer-uppers."

Warren says the renovation boom is likely to continue as low interest rates make it easier to improve one's home, which has proven to be a worthwhile investment in recent years.

"A large share of home renovations are made by recent buyers, and by sellers preparing to list," Warren said.

The fortune of the renovation sector appears to be intrinsically tied to the overall housing market. As long as sales and prices keep going up, owners are going to be more willing to spend on fixing up their houses.

But even if prices eventually decline, Canada's relatively high rate of home ownership, at 70 per cent, is good for the reno industry as owners are more likely to undertake upgrades than landlords or renters even if the housing market slows down.