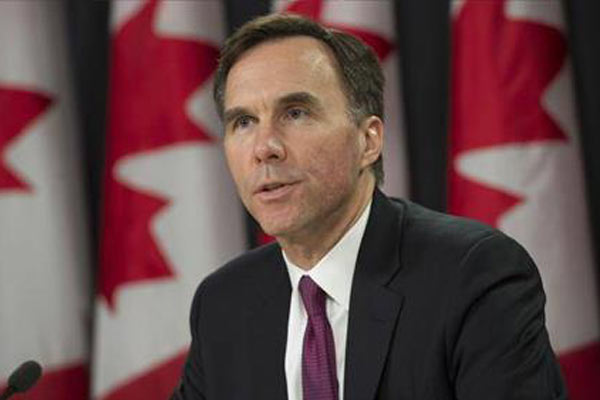 The federal government formally launched consultations Friday to explore potential changes that would shift some of the financial risk tied to insured mortgages from the shoulders of taxpayers to lenders, such as the banks.

Under Canada’s current system, lenders are able to transfer virtually all of the risk from insured mortgages to insurers, which are indirectly backstopped by taxpayers, the government said.

The Finance Department has been examining the possibility of making such a change for a couple of years and it’s now seeking more input.

The consultations are designed to help Ottawa determine whether having lenders absorb a modest chunk of loan losses on insured-mortgage defaults would help shore up stability in the system.

The trade-off from such a shift in risk away from taxpayers would likely raise costs for lenders, and therefore, homebuyers – but the government expects any impact to be “limited.”

The background document said a preliminary analysis suggests the average increase in lender costs over a five-year period could be 0.2 to 0.3 percentage points.

For several years, the International Monetary Fund has fired off warnings that Ottawa should consider scaling back its role in insuring home mortgages through the government’s Canada Mortgage and Housing Corp. The government-backed Canadian system is viewed as unique in the world.

Homebuyers with a down payment of less than 20 per cent of the sale price are required to acquire mortgage-default insurance from either CMHC or a private mortgage insurer.

Last week, CIBC CEO Victor Dodig said in an interview that he expected the talks on lender risk sharing to be “constructive.”

“I think the goal of the government is to make sure that the taxpayer is not on the hook to support financial institutions in a perceived or real way,” Dodig told The Canadian Press.

Dodig said it’s been a hallmark of the Canadian system for the regulator, the government, policy-makers and the financial services sector to work together towards ensuring stability access to credit for clients and strength in the banks. He added that they also aim to manage the growth in asset values appropriately given the low-interest-rate environment.

For its part, the Canadian Bankers Association has shared some concerns about lender risk sharing.

In a statement earlier this month, the group said introducing the approach through a deductible on mortgage insurance would represent a “significant structural change” to the current housing finance system.

“We have concerns that it could have negative side effects on a housing finance system that has worked smoothly, simply and efficiently and served Canada’s economy well,” the association said.

“The CBA is looking forward to engaging with the government during the consultation process to explore in detail the implications of a possible move to lender risk sharing.”