Sustained housing price increases still outpacing the recovery in fundamental factors, such as labour income, means Canada's national housing market remains moderately vulnerable, with more pronounced vulnerabilities in large cities and smaller centres. This analysis is according to the Canada Mortgage and Housing Corporation (CMHC) Housing Market Assessment (HMA) released today. The current HMA is based on preliminary data up to the fourth quarter of 2020, and market intelligence up to February 2021 at the national level and detailed results for 15 CMAs.

Imbalances of concern include an increase in the number of CMAs displaying evidence of overheating, price acceleration and overvaluation. Housing markets across the country continued to experience elevated sales in the fourth quarter while new listings remained low. 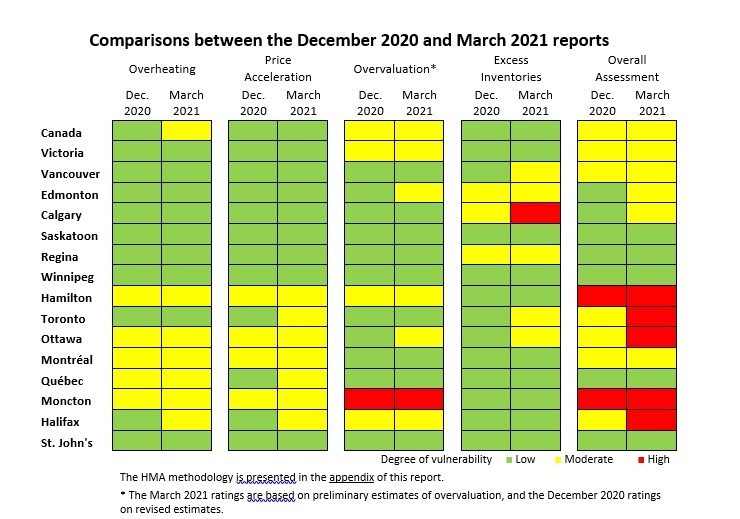 In Montréal, the degree of overall vulnerability in the housing market remained moderate. However, the quarterly pace of sales set new records. This caused significant price appreciation in Montréal, meaning the emergence of overvaluation imbalances must be closely monitored.

Calgary is now rated with high evidence of excess inventories*, while Edmonton moved from low to moderate evidence of overvaluation. Overall, the housing markets in both of Alberta`s largest CMAs moved to a moderate degree of vulnerability.

In previous editions of the HMA, the factor "overbuilding'' was used to indicate an elevated number of unoccupied new units in the homeownership market or a high vacancy rate in the rental market. The name of this factor could have led one to believe the HMA reported on excessive construction activity. However, this was not the intended interpretation; we intended to report on excessive quantity of unoccupied units in the short term that could place the owners of those units at financial risk. This HMA introduces the term "excess inventories" instead.

Excess inventories are a risk even in unaffordable markets. However, even if there are short-term periods of excess inventories, such markets would continue to benefit from long-term increases in housing supply.