Home sales via Canadian MLS® Systems rose for the fourth month in a row in November 2017, up 3.9% from October. Led by a 16% jump in sales in the Greater Toronto Area (GTA), the surge in sales there accounted for more than two-thirds of the national increase. The continuing rebound put November sales activity a little over halfway between the peak recorded in March 2017 and the low reached in July. 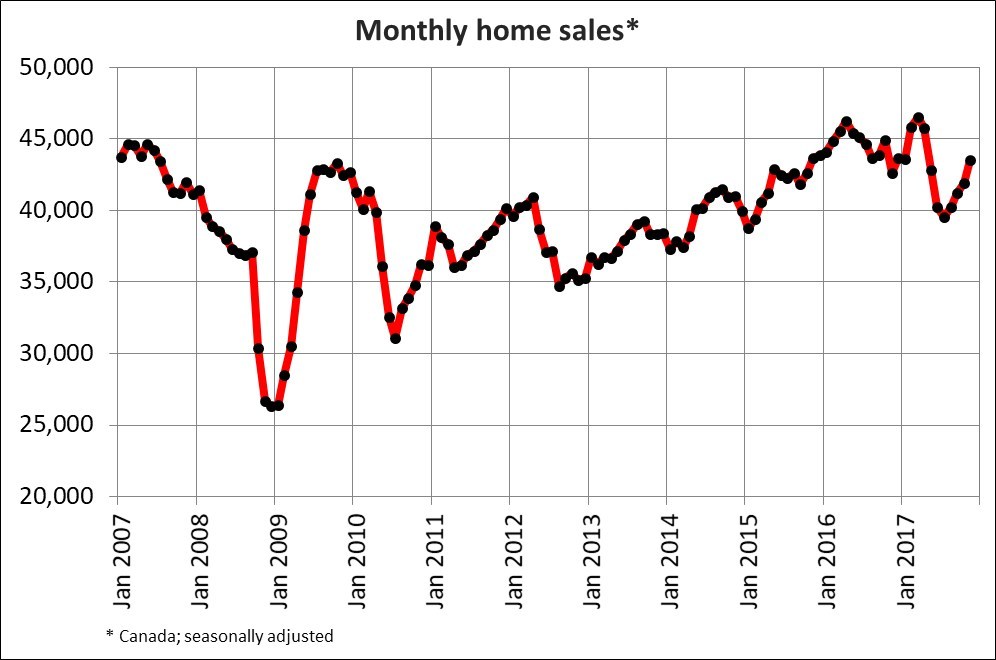 Actual (not seasonally adjusted) activity rose 2.6% y-o-y, setting a new record for the month of November. It was the first y-o-y increase since March and was unassisted by the GTA, where activity remains down significantly from year-ago levels. A number of other large markets posted y-o-y activity gains, including Greater Vancouver and the Fraser Valley, Calgary, Edmonton, Ottawa, and Montreal.

"Some home buyers with more than a twenty percent down payment may be fast-tracking their purchase decision in order to beat the tougher mortgage qualifications test coming into effect next year," said CREA President Andrew Peck. "Evidence of this is mixed and depends on the housing market. It will be interesting to see whether December sales show further signs of home purchases being fast-tracked. A professional REALTOR® is your best source for information and guidance in negotiations to purchase or sell a home during these changing times."

The number of newly listed homes rose 3.5% in November, which reflected a large increase in new supply across the GTA.

That said, the balanced range for the measure can vary among local markets. Considering the degree and duration that the current market balance is above or below its long-term average is a more sophisticated way of gauging whether local housing market conditions favour buyers or sellers. (Market balance measures that are within one standard deviation of the long-term average are generally consistent with balanced market conditions).

Based on a comparison of the sales-to-new listings ratio with its long-term average, more than half of all local markets were in balanced market territory in November 2017.

There were 4.8 months of inventory on a national basis at the end of November 2017 – down slightly from 4.9 months in October and around 5 months recorded over the summer months, and within close reach of the long-term average of 5.2 months.

At 2.4 months, the number of months of inventory in the Greater Golden Horseshoe region is up sharply from the all-time low of 0.8 months reached in February and March. Even so, it remains below the region's long-term average of 3.1 months.

The Aggregate Composite MLS® HPI rose by 9.3% y-o-y in November 2017. This is a further deceleration in y-o-y gains that began in the spring and the smallest increase since February 2016.

Benchmark home prices were up from year-ago levels in 11 of the 13 markets tracked by the MLS® HPI.

After having dipped in the second half of last year, benchmark home prices in the Lower Mainland of British Columbia have recovered and now stand at new highs (Greater Vancouver: +14% y-o-y; Fraser Valley: +18.5% y-o-y).

Benchmark home prices rose by about 14% on a y-o-y basis in Victoria and by 18.5% elsewhere on Vancouver Island in November, on par with y-o-y gains in October.

Calgary benchmark home prices remained just inside positive territory on a y-o-y basis (+0.3%), while prices in Regina and Saskatoon were down from last November (-3.5% y-o-y and -4.1% y-o-y, respectively).