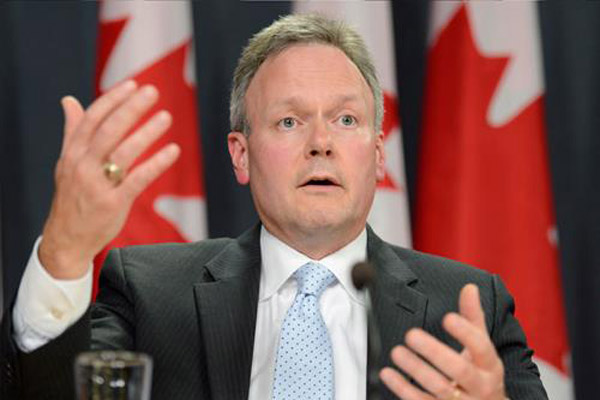 Economists had all but given up on a further rate cut, but after a look at Friday’s dismal GDP data, many figure the Bank of Canada might opt for a bit more “insurance.”

Canada’s economy shrank 0.6 per cent in the first quarter, the first contraction in four years and the largest since the 2009 recession as collapsing energy prices prompted a plunge in business investment.

The performance was worse than expected by the Bank of Canada — whose governor Stephen Poloz famously predicted would be ‘atrocious’ — and most economists.

Here’s what the economists are saying this morning:

Bank of America Merrill Lynch
“Today’s data suggest the oil shock is much larger than the BoC had feared, and may be affecting other sectors of the economy, including households ….
We have cut our call for 2Q GDP to 0.5% from 1.2% in light of today’s GDP report. This is much weaker than the BoC’s expectations for growth
With the trajectory for the output gap to close later than expected, the BoC can do one of three things this year: 1) forego cuts, and allow disinflationary pressure to build 2) cut rates at their July meeting 3) cut rates later, say at their October meeting.

An ease in July makes sense, but such a jarring switch from earlier optimism would be a communication challenge for Governor Poloz, especially after criticism following the surprise ease in January. Thus, October is still our base case for a cut, but persistently weak data could put a July ease on the table.

In terms of the implications for the BoC, the central bank had warned that any unexpected weakness would more likely be due to an earlier, negative impact from weaker oil prices rather than to a larger overall hit to growth and that indicators should begin to improve in Q2.  They can legitimately say that is still the case, but it puts a real onus on upcoming data.  A 0.2% downward revision to 2014Q4 GDP output as well as the headline Q1 miss in this report would leave the output gap a little bigger than assumed by the BoC (by about 1/4pp), the price deflators were relatively soft (the personal consumption deflator was 1.1% on a year-ago basis, the final domestic demand deflator 1.8%) and the poor composition for a Q2 kick-off (from the inventory build and March dip in activity) should be a cause for concern.

We had been expecting choppy data to allow markets to price in a stronger chance of a rate cut (expressed through a receive October OIS position) and today’s report is consistent with that notion, even if the central bank is able to resist the temptation at the July 15th rate meeting and MPR, which remains our base case with the next move expected to be a hike in 2016Q2.  Nevertheless, as we said in our BoC rate meeting summary on Wednesday, the July confab will be a much more interesting affair!

The triple whammy of a weaker than expected headline figure for Q1, downward revisions to last year, and a decline in March’s monthly GDP give this report a thumbs down. While the equally weak U.S. result for the quarter provides some cover, it now looks like Canada will have a much tougher time than the U.S. rebounding quickly in Q2 from the winter chill. Accordingly, we have cut our annual forecast yet again to 1.5% (latest consensus is 1.9%), before perking back up to 2.2% next year (no change). To put it in perspective, growth of 1.5% would be the slowest for Canada outside of recession in at least the past three decades. Suffice it to say, this dreary growth backdrop will keep the Canadian dollar on the defensive, and the Bank more biased to ease than tighten barring a surprising revival in oil prices.

The unexpected 0.6% annualised decline in first-quarter GDP suggests that the Bank of Canada’s single 25 basis point rate cut in January may not have been enough insurance against the oil price slump after all. Most worryingly, things seemed to be getting worse as the first quarter went on, with monthly GDP showing a 0.1% m/m decline in February and then a 0.2% m/m decline in March. That is a very weak starting point for the second quarter.

The only “good” news in any of this is that the residential investment expanded by 4.0% annualised. But we suspect it won’t be long before what is clearly an unsustainable boom in condo construction goes into reverse too.

Overall, the evidence weakness triggered by the oil price slump supports our view that the Bank of Canada will need to lower interest rates again before the end of this year.

Canada’s economy looked weak in Q1 in volume terms, and add in sharply plunging prices for oil and the value of what the country produced started the year in a tailspin. Real GDP was -0.6% annualized, which was more than a full percentage point weaker than we anticipated, a miss that can be tallied up to a drop in March’s monthly GDP results (-0.2%) and a downward revision to February (a tick lower at -0.1%). In the quarterly data, consumer spending was tepid at a 0.4% annualized pace, but the major negative was in business investment spending, sporting a 9.7% annualized dive. Exports and imports were also both weaker than the monthly data to date had suggested, and government spending was also in decline. Nominal GDP was much worse, down roughly 3% annualized (a 0.7% unannualized drop). March’s drop was led, not surprisingly, by a decline in the mining, oil and gas sector.

Overall, weaker than expected by either the market or the Bank of Canada, which will keep speculation about a follow-up rate cut alive, although an actual cut still seems unlikely unless the economy continues to struggle in the second half.