Bank of Canada hikes rate to 2.5% - here's what it means for you

The Bank of Canada has raised its benchmark interest rate by the largest amount in more than 20 years, sharply increasing the cost of borrowing in an attempt to rein in runaway inflation.

Canada's central bank raised its benchmark interest rate Wednesday by a full percentage point to 2.5 per cent. That's the biggest one-time increase in the bank's rate since 1998.

The bank's rate impacts the rate that Canadians get from their lenders on things like mortgages and lines of credit. At least one of Canada's big banks has already moved its prime lending rate in response, with Royal Bank raising its rate from 3.7 per cent to 4.7 per cent as of Thursday morning.

The other major lenders are expected to follow suit in short order.

All things being equal, a central bank cuts the lending rate when it wants to stimulate the economy by encouraging people to borrow and invest. It raises rates when it wants to cool down an overheated economy.

After slashing its rate to record lows at the start of the pandemic, the bank has now raised its rate four times since March as part of an aggressive campaign to fight inflation, which has risen to its highest level in 40 years.

Economists had been expecting the bank to raise its rate by three-quarters of a percentage point, but the full percentage point increase was ahead of even those high expectations. And even after this record-setting increase, more hikes are expected, because of how serious the spectre of stubbornly high inflation is.

Bank of Canada governor Tiff Macklem said the bank made the decision to front-load its rate-hiking campaign because Canadians "are getting more worried that high inflation is here to stay. We cannot let that happen."

"We are increasing our policy interest rate quickly to prevent high inflation from becoming entrenched. If it does, it will be more painful for the economy — and for Canadians — to get inflation back down," he said, noting that the bank doesn't expect the official inflation rate to come down to three per cent until next year, and wont get back to its two per cent target until 2024.

Economist Stephen Gordon with the University of Laval says it's clear the bank has miscalculated the speed with which inflation was going to heat up, and are now trying to course correct on the fly.

"They're paying a bit of a catch up here, and that's partly why they're going up so fast," he said in an interview.

While the size of the hike was outside the norm, he says it was warranted given the unprecedented challenges facing the economy today.

"We're in a situation where we have supply chain disruptions, really high oil prices, pent up demand coming out of the pandemic," he said.

"We're in new territory here, so there's very little to guide us in the way of history. We're just going to have to feel the way forward."

Housing market will feel the pinch

The impact of higher rates will be felt most directly on the housing market, as variable rate mortgages are closely tied to the central bank's rate.

Canada's housing market was red hot for most of the pandemic, as record low rates fuelled demand and pushed prices up to their highest levels ever. But that direction turned in the first part of this year, as the central bank's signal that higher rates were coming took the wind out of the sails of insatiable demand.

Average prices have fallen since March across the country, the Canadian Real Estate Association says. Wednesday's rate hike will do nothing to reverse that trend.

Prospective home buyers must have their finances stress tested to ensure that they can withstand higher lending rates, and Wednesday's rate hike will raise that testing bar to about seven per cent for fixed rate loans, and six per cent for variable loans.

If borrowers don't pass the stress test, lenders are obligated to lower the amount they will lend to them, until they meet the bar. 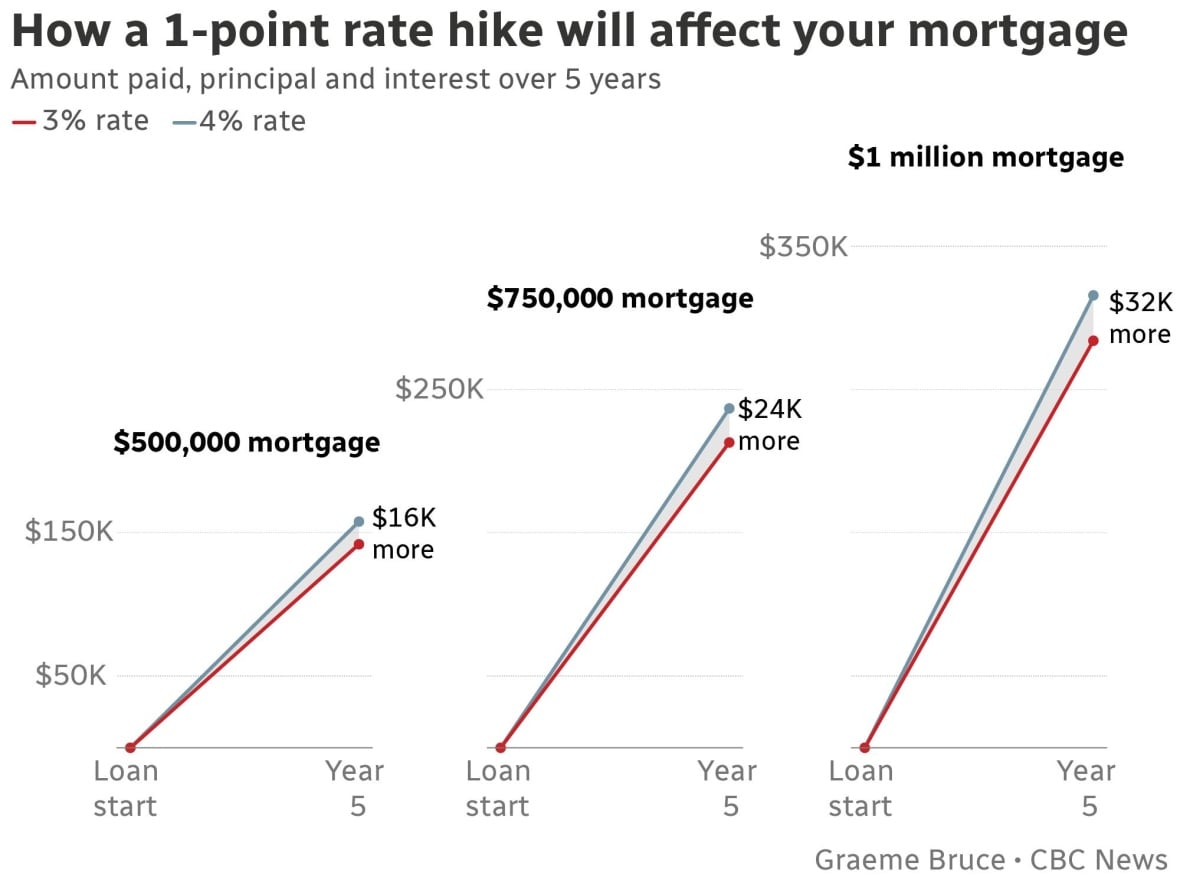 Anyone who currently has a variable rate loan - and anyone looking to get one in order to buy - will likely notice their mortgage rates go up almost immediately.

On a $400,000 mortgage amortized for the normal time frame of 25 years, a borrower who signs up for a loan at a three per cent rate will pay $1,893 a month. But if their rate jumps by a full percentage point, the way the bank's rate just did, that monthly payment will go up to $2,104 a month. That's an extra $211 every month out of their budget.

If the rate goes to five per cent, the monthly payment jumps to $2,326, which would be more than 22 per cent higher than what they were originally paying.

Increases like that are exactly what home owner Tim Capes was worried about last month when he switched his home loan from a variable rate to a fixed-rate mortgage.

"We felt the pain every time interest rates would go up and we'd get a letter from the bank that our mortgage would go up by a certain amount and the budget would get a tiny bit tighter," he told CBC News in an interview.

After seeing his payment go up each time the central bank raised its rate in March, April and then June, Capes decided to bite the bullet and lock in at a fixed rate that is costing him about $700 more per payment than he was paying before, but at least comes with the certainty that it won't change for the next five years.

"I definitely wish I had done it earlier when the rates were even lower because definitely selecting a variable in the first place was a mistake," the Markham, Ont., resident said. "But we ultimately decided it was a mistake we could afford to correct. So we did."

Economists are expecting several more rate hikes to come, and so is Capes.

"As those rate hikes start happening, it's a lot easier knowing that my mortgage isn't going up with every single rate hike."